Description: The Himalayan monal has striking colour characteristics that set it apart from other ornamental pheasants. The male has a metallic green crest, with red feathers mixing to blue along the back. The short tail is red-brown, the breast and underparts are black, and a white rump patch and brown wings show in flight. Female colouration is a mix of brown and buff, with a pale blue ring around the eye and prominent white patch under the chin.

Distribution and Habitat: A high-altitude species, the Himalayan monal is found in a wide range in the Himalayas, from Afghanistan to Bhutan, India, and Tibet. In the summer months these pheasants forage on grassy areas, but in the colder winter months they inhabit forested areas where they can find shelter. In certain areas Himalayan monals are considered a species at risk.
• See Map

Diet: Avid diggers, Himalayan monals use their strong beak and claws to dig for food items such as roots, insects, and seeds, making a distinct pattern in the soil where they have been foraging.

Life Cycle: Himalayan monals use a variety of calls for communication and the male is very vocal throughout the day in early breeding season while trying to attract a mate. Females dig a shallow nest in the ground and lay 3 – 5 eggs which she incubates for 27 days. The male remains close by for protection and helps to raise the chicks for the six months it takes for the young to become self-sufficient.

Did you know? The Himalayan monal is the national bird of Nepal. 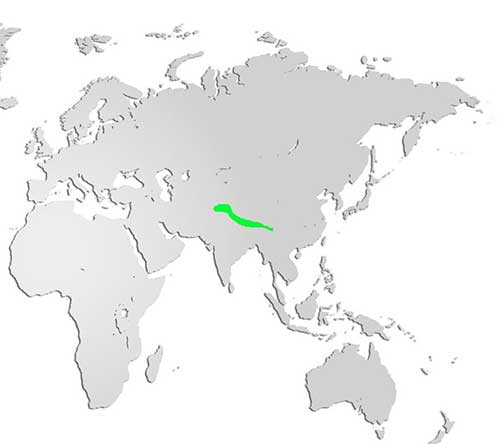