Description: Like most other long tailed pheasants, the Hume’s, or bar-tailed pheasant has distinctive red wattles around the eyes. Male Hume’s pheasants have blue rump feathers scalloped with white above a brown and buff barred tail. The male’s back and sides are a rich red-brown with four wing bars: three white and one dark blue. The head is olive brown and the throat and breast are dark blue. Female Hume’s pheasants are smaller, mottled buff and brown, but share some of the same scalloped feather markings along the back.

Distribution and Habitat: Considered Near-Threatened in their natural habitat of the mountains of northern India and Myanmar, Hume’s pheasants forage on rocky hillsides and roost in mixed forests.
• See Map

Diet: Hume’s pheasant chicks are mainly carnivorous, eating mostly insects, but increase the plant matter in their diet as they grow. As adults they are predominantly herbivorous, foraging for plants, berries, seeds and roots.

Life Cycle: These pheasants are polygamous, typically grouped with one male and two females. Nesting occurs on the ground and the female incubates a clutch of 6 to 10 eggs, alone, for 24 to 28 days.

Did you know? The Hume’s pheasant was named in honour of Mary Anne Hume, wife of famed British ornithologist Allan Octavian Hume. 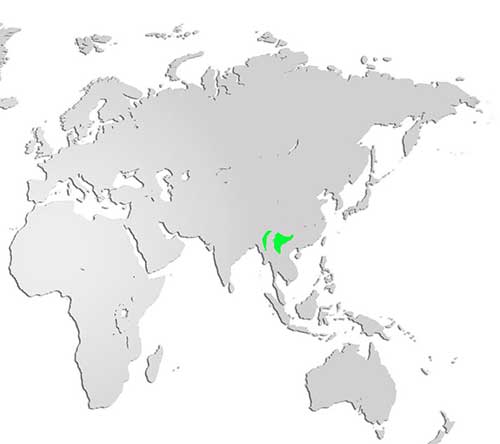